The Wizarding World of Harry Potter

I’ve just returned from Universal Studios in Orlando, Florida, and will be doing a series of posts on my experiences in Harry Potter World. I’m a big fan… and the park had a lot to live up to… I’ll try not to give too much away for those of you who haven’t journeyed to the Wizarding World of Harry Potter. But hopefully my posts will either bring back memories of your own trip or entice you to travel there yourself!
This post will highlight:
Hogsmeade, Honeydukes, Zonkos

This last post about my trip to Harry Potter World will focus on Hogsmeade in general and the two most colorful shops on the block: Honeydukes and Zonkos.

Hogsmeade village was totally charming.  Despite the Harry Potter World being in Florida, the snow covered rooftops and icicles hanging from the windows add a definite extra bit of magic.  I loved how many of the chimneys are crooked and how there are detailed shop windows as you stroll down the street.  The attention to detail in the buildings is truly amazing!

The Hogwarts Express was the perfect thing to put at the entrance to the park!  The shiny red train has become so emblematic of the series and people can’t help but feel like they’re arriving just like Harry did when they see it.  Below are my brothers and me with the Hogwarts Express and a few pictures of Hogsmeade village:

Honeydukes is definitely one of the most dazzling candy shops I’ve ever been in!  The bright green and pink paint are perfectly suited to the glass jars of candy and delectable goodies they have for sale.  There are shelves upon shelves of Chocolate Frogs.  Boxes and boxes of Bertie Bott’s Every Flavor Beans.  Sugar quills, Ton-Tongue Toffee, Pepper Imps, Peppermint Toads…  They had so many different types of candy straight out of the books.  The Cauldron Cakes were especially cool looking (but I didn’t get a picture of them).  They were chocolate cauldrons that looked like they had green icing/foam bubbling out of the top.

My only complaint about Honeydukes is how expensive it was.  A single Chocolate Frog costs $12.  A small box of Bertie’s Beans costs $10.  In fact, I don’t think I saw anything under $10… I would guess going into a shop like that with small children would be every parent’s worst nightmare.

Zonko’s Joke Shop was equally colorful with lots of quirky games and toys.  They have fluffy toy Pygmy Puffs, You-No-Poo, and Extendable Ears among loads of others.  I kind of wish I’d bought an Extendable Ear.  The box said they extend up to 12 feet, and it looks like it’s a rubbery, fleshy ear with a microphone inside and a long cord that leads to a small box with an earbud attached.  Pretty cool how they managed to create that, though it looks less inconspicuous than how I imagined the Weasley’s version in the books.

Below are some pictures of both Honeydukes and Zonkos: 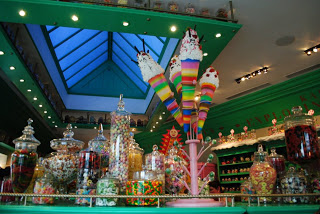 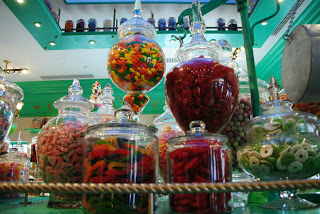 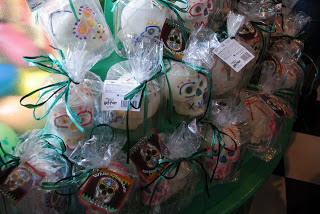 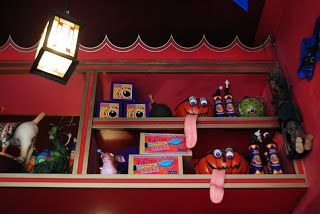 A few more things I wish they had at Harry Potter World:
Each post I’ve been coming up with something I think the park needs, but it’s pretty clear that I basically want the entire world of Harry Potter to be recreated!  But here are a few more things I’d like to see at the park someday:
-Quidditch Match (3D show perhaps?)
-Room of Requirement (maybe a set of doors with rotating rooms behind it?)
-A potion brewing experience!
-Grimmauld Place (complete with screaming Mrs. Black and Kreacher)
-The Weasley House (of course!)

And finally, while I found the walkthrough Hogwarts to be very fun, I couldn’t help but imagine a Hogwarts ride kind of like the Haunted Mansion ride at Disney.  I’d love to get a FULL tour of Hogwarts through classrooms, the House common rooms, etc. with ghosts drifting by and staircases changing and portraits talking.  To me, that would be the perfect Hogwarts ride (not that Forbidden Journey wasn’t totally awesome, but it was more of a “let’s scare you and whip you around” type ride).

Thanks for checking out all my Potter posts this past week!  I’ve been having lots of fun sharing and reliving my experience with you!  I hope everyone gets to go someday!  It’s definitely worth the trip for any Potter fan!  🙂