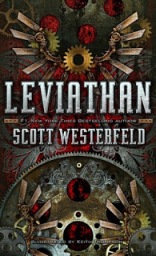 Summary:
When his parents are murdered, Prince Alek must disappear and go into hiding. Meanwhile, Deryn Sharp is determined to fly, even if it means disguising herself as a boy and lying her way into the British Air Service. An unlikely friendship blossoms between an heir to the throne and a common airman amidst a war that encompasses the world. 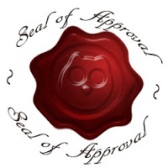 This book is receiving the Hughes Reviews Seal of Approval (graphic designed by my awesome brother). I think this series is pure genius, and I don’t understand why it hasn’t garnered more attention. I honestly think this series deserves every award you could throw at it. Allow me to tell you why I love book one:

World-Building:
Scott Westerfeld takes world-building to a whole new level in this series. The size, scope, and detail of his setting is unbelievable. He creates dozens of creatures, some of which interact with other creatures to create a complex sustaining web to fuel even bigger creatures. Uh yeah. That complex! Not only does he create creatures, he also creates scores of machines. Giant walking war machines. With levers and vision shields and pressure valves and all kinds of detail that will blow your mind. And then on top of creating all these creatures and machines, he weaves these creations into the actual web of history. Real people, real countries, real events from World War I. He puts his creations inside real historical context to create an alternate history that makes perfect sense. If this sounds complicated, it’s because it is. But as a reader, you’re introduced to this world in such a seamless, gentle way that it all makes sense. I’ve had 11-12 year olds read this series. You don’t have to be a rocket scientist to understand it all, though I think some people find the premise of this book intimidating.

Characters:
Want a gender-bending novel? You’ve got it. A prince. And a girl in the air force. Both are unique and goal-driven characters with secrets to hide. Westerfeld narrates through both Deryn and Alek and accomplishes giving each character a distinct voice. Deryn’s voice is my favorite, and I kinda want to go around exclaiming “Barking spiders!” The secondary characters are equally colorful, from boffin (scientist) Dr. Barlow (female scientist I might add!) to the stodgy but devoted Count Volger.

Setting:
I pulled this apart from world-building because it deserves its own category. The settings in this book are so sweeping and grand. From the Leviathan itself, topside and in the gondola corridors to the deserted winter landscape with a hidden castle in the distance. These settings are memorable and beautifully crafted as well as adding complications to the plot.

Plot:
The beginning of the book starts off introducing you to Westerfeld’s world and shifts back and forth from Deryn’s point-of-view to Alek’s point-of-view in order to reveal each of their characters and secrets. But the book really takes off when Deryn and Alek meet. There is a great sense of tension between Clankers (machines) and Darwinists (creatures) that causes tension between Deryn and Alek, but at the same time there is a sense that these two have an understanding of each other and a sense of fate about their friendship. There are twists and turns throughout the plot and conflict abounds.

Mystery:
What is in Dr. Barlow’s eggs? What is she up to? Why does everyone listen to her if she’s just a mad boffin?

BONUS! Gorgeous Illustrations:
Throughout the book are DOZENS of stunning pieces of artwork by illustrator Keith Thompson. They aid in your imagination of Westerfeld’s sometimes bizarre creations, and add a lovely layer to the world-building. Sometimes it appears as if the drawings are literally coming off the page. Here are two images for your viewing pleasure: 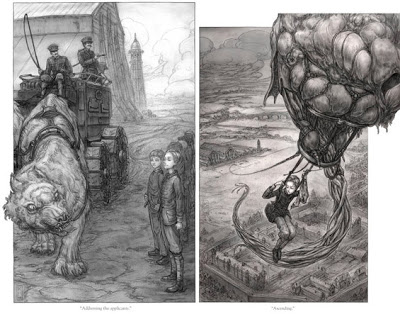 Overall Rating:
Leviathan is a superb first book in this steampunk trilogy that takes you into a clever, imaginative world within the backdrop of World War I. By the end of the book, you will want to continue your adventures on the Leviathan with Deryn and Alek. I can’t recommend this series highly enough for fans of fantasy, science-fiction, or historical fiction.