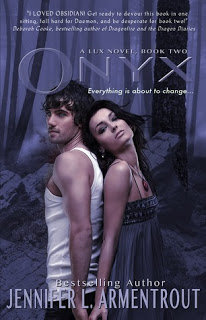 *This Review Contains Some Mild Spoilers*

Summary:
After Daemon heals Katy, there’s some sort of connection between them.  And Katy can suddenly do things that she couldn’t before.  And suddenly Daemon has decided that he wants to be with her?  He was such a total jerk, that Katy is having a hard time believing that he has true feelings for her, that aren’t just their special alien connection.  And then there’s the new boy… And the new threat of the Department of Defense which might be worse than the Arum…

Daemon Black:
In Onyx, “Jerk Daemon” becomes “Sweet Daemon” and I love it.  Don’t get me wrong, I like the whole bad boy thing, but when Daemon turns on the charm as he tries to woo Katy and prove his feelings for her, I was smitten.  There were some seriously sweet moments that melted my heart, but I don’t want to give even one of them away.  Part of the fun was seeing what Daemon had up his sleeve.

Raising the Stakes:
So the evil alien Arum were scary, but Armentrout introduces a bigger, badder villain in Onyx: The Department of Defense.  Actions in the first book have unforeseen consequences that up the stakes in the second book and put many characters in serious danger.  The action in this book is unbelievable.  You don’t know who to trust.  People DIE.  I praised Obsidian for being a page-turner, and Onyx is just as good if not better.  You won’t be able to put this book down.

Love Triangle?
I never wanted Katy to be with anyone but Daemon, but at the same time, I understood why Katy considered seeing the new guy Armentrout introduced in this book.  Daemon is complicated.  He’s an alien.  He’s been a jerk.  And when Armentrout brings in new guy Blake, with the blonde surfer guy look, I do understand why Katy considers seeing someone normal.  Though I still thought she was being an idiot because who wouldn’t want to be with Daemon… but whatever.  While it can be frustrating because second books always seem to introduce “another guy” I did feel like Armentrout justified and executed this love triangle pretty well.

Overall Rating:
This was an excellent second book in the series with growth in the characters, high stakes, and a plot with lots of twists, turns, and consequences.  Luckily, you don’t have to wait to pick up book three, Opal, because you’ll definitely want to start the sequel as soon as you finish Onyx.  Four stars.

My review of Opal will be posted on Saturday… Stay tuned!