Each month I’ll be doing one post to highlight book releases by debut authors that I have my eye on.  Check back at the end of the month for reviews! Or feel free to try to sway my opinion to read other debuts as well!

R. H. Ragona’s Circus of Magic is the greatest circus of Ellada. Nestled among the glowing blue Penglass—remnants of a mysterious civilisation long gone—are wonders beyond the wildest imagination. It’s a place where anything seems possible, where if you close your eyes you can believe that the magic and knowledge of the vanished Chimaera is still there. It’s a place where anyone can hide.
Iphigenia Laurus, or Gene, the daughter of a noble family, is uncomfortable in corsets and crinoline, and prefers climbing trees to debutante balls. Micah Grey, a runaway living on the streets, joins the circus as an aerialist’s apprentice and soon becomes the circus’s rising star.
But Gene and Micah have balancing acts of their own to perform, and a secret in their blood that could unlock the mysteries of Ellada.

What grabbed me:
This sounds like such an imaginative and unique story, and I love the cover!

An exotic treat set in an entirely original, fantastical world brimming with deadly mystery, forbidden romance, and heart-stopping adventure.
Nisha was abandoned at the gates of the City of a Thousand Dolls when she was just a child. Now sixteen, she lives on the grounds of the isolated estate, where orphan girls apprentice as musicians, healers, courtesans, and, if the rumors are true, assassins. Nisha makes her way as Matron’s assistant, her closest companions the mysterious cats that trail her shadow. Only when she begins a forbidden flirtation with the city’s handsome young courier does she let herself imagine a life outside the walls. Until one by one, girls around her start to die.
Before she becomes the next victim, Nisha decides to uncover the secrets that surround the girls’ deaths. But by getting involved, Nisha jeopardizes not only her own future in the City of a Thousand Dolls—but her own life.

This sounds like a gripping and suspenseful read set in a fantastical world. Add a dash of romance to the adventure and mystery, and this sounds like my ideal read!

Addison Coleman’s life is one big “What if?” As a Searcher, whenever Addie is faced with a choice, she can look into the future and see both outcomes. It’s the ultimate insurance plan against disaster. Or so she thought. When Addie’s parents ambush her with the news of their divorce, she has to pick who she wants to live with—her father, who is leaving the paranormal compound to live among the “Norms,” or her mother, who is staying in the life Addie has always known. Addie loves her life just as it is, so her answer should be easy. One Search six weeks into the future proves it’s not.
In one potential future, Addie is adjusting to life outside the Compound as the new girl in a Norm high school where she meets Trevor, a cute, sensitive artist who understands her. In the other path, Addie is being pursued by the hottest guy in school—but she never wanted to be a quarterback’s girlfriend. When Addie’s father is asked to consult on a murder in the Compound, she’s unwittingly drawn into a dangerous game that threatens everything she holds dear. With love and loss in both lives, it all comes down to which reality she’s willing to live through . . . and who she can’t live without.

I love this concept of two completely different lives stemming from a single choice and how intriguing that she can see the possibilities and both options have serious pros/cons. I love everything about this premise!

Dancing with someone is an act of trust. Elegant and intimate; you’re close enough to kiss, close enough to feel your partner’s heartbeat. But for Vanessa, dance is deadly – and she must be very careful who she trusts . . .
Vanessa Adler attends an elite ballet school – the same one her older sister, Margaret, attended before she disappeared. Vanessa feels she can never live up to her sister’s shining reputation. But Vanessa, with her glorious red hair and fair skin, has a kind of power when she dances – she loses herself in the music, breathes different air, and the world around her turns to flames . . .
Soon she attracts the attention of three men: gorgeous Zep, mysterious Justin, and the great, enigmatic choreographer Josef Zhalkovsky. When Josef asks Vanessa to dance the lead in the Firebird, she has little idea of the danger that lies ahead – and the burning forces about to be unleashed . . .

What grabbed me:
The cover is creepy but beautiful.  I did ballet up until middle school and will always have a fondness for it.  I love to read books that take me back to that past love.  Plus this sounds like a suspenseful read!

The city of Kersh is a safe haven, but the price of safety is high. Everyone has a genetic Alternate—a twin raised by another family—and citizens must prove their worth by eliminating their Alts before their twentieth birthday. Survival means advanced schooling, a good job, marriage—life.
Fifteen-year-old West Grayer has trained as a fighter, preparing for the day when her assignment arrives and she will have one month to hunt down and kill her Alt. But then a tragic misstep shakes West’s confidence. Stricken with grief and guilt, she’s no longer certain that she’s the best version of herself, the version worthy of a future. If she is to have any chance of winning, she must stop running not only from her Alt, but also from love . . . though both have the power to destroy her.
Elsie Chapman’s suspenseful YA debut weaves unexpected romance into a novel full of fast-paced action and thought-provoking philosophy. When the story ends, discussions will begin about this future society where every adult is a murderer and every child knows there is another out there who just might be better.

What grabbed me:
Yikes!  Killing your twin?!?!  Definitely sounds similar to Hunger Games.  Looks like a fast-paced and exciting read!

Some debut novels from January that I purchased and also plan to read: 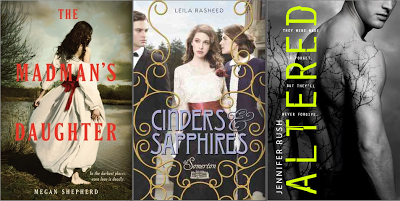