(And I promise not all of them are Harry Potter memories!  Just four of them…)

Persuading my Little Brother
to Read Harry Potter
I’m beginning with my Harry Potter memories.  I wish I had more documentation of this part of my life in photographs, but I don’t think I realized at the time how much this period of my life would end up meaning to me.  I began reading Harry Potter in 8th and 9th grade.  And after plowing through the first three books, I wanted other people to read them.  Especially my younger brothers.

I’m pretty sure I got one younger brother to read them fairly easily.  But my other brother, who is four years younger than me and would have been in 5th or 6th grade was a much tougher audience to persuade.  I think Harry Potter might have been too challenging for him to read at the time because he was still reading mostly Magic Treehouse books.

But I was relentless.  I turned to bribery.

My brother is going to be a magnificent game designer someday, and even back then at age 11, he was creating made-up games for us to play.  His favorite made-up game at the time was called “Pokémon LIVE!”  Which pretty much involved him acting like Pokémon and me being the trainer and acting out the video game.  I hated playing this game because every time we played I had to start from the beginning again because we didn’t have a good method of recording our progress in Pokémon LIVE!

So my form of bribery was that I would play one whole hour of Pokémon LIVE! for every chapter of Harry Potter that he read.  I was such a good sister.  And it turns out… I converted him… As you can see from the evidence below…

Harry Potter and the Goblet of Fire
Book Release
I actually wasn’t allowed to go to the midnight release party for Goblet of Fire.  We were at my grandparents’ house at the beach, and my parents told us they would go and pick up the book at midnight so that it would be waiting for us in the morning.

Well, we might not have been allowed to go to the release party, but we definitely didn’t go to sleep like we were told.  My brothers and I shared one bedroom at my grandparents’ house, and we spent the night talking.  It is one of my favorite childhood memories: staying up with my brothers, rebelling against our parents’ wishes, too excited to sleep over a Harry Potter book.

When we heard our parents get back, we all pretended to be asleep.  They put the book on our bedside table, and as soon as they were out of earshot, we crowded together to read the first chapter.  We didn’t do more than the first chapter because I think we got frustrated that we all read at different speeds (and we couldn’t read aloud because our parents would hear us).  But that excitement and bonding moment with my brothers is definitely one of my favorite bookish memories.
Harry Potter and the Deathly Hallows
Book Release
This is another memory that involves the beach, my brother, and Harry Potter.  Notice a trend?  This summer, I spent entirely at the beach with my youngest brother (the one pictured above).

And this time, we did attend the midnight release party at the same bookstore that my parents had purchased Goblet of Fire.  We made a whole evening of it.  First going out to dinner and then strolling the boardwalk and buying huge bags of Jelly Belly’s to eat while we waited in line (and pretend we were eating Bertie Bott’s Every Flavor Beans).  We didn’t dress up, though I distinctly remember a Bellatrix being near us in line.

I accidentally drove North instead of South for several miles on the way home that night because I was so distracted by my excitement.  But I treasure that I got to spend this final book release with my brother at one of my favorite bookstores, munching on jelly beans.  Good times.

Harry Potter World
I made the trip to The Wizarding World of Harry Potter last year for my birthday.  My whole family went with me, and we experienced the magic together.  I chronicled my trip in a series of blog posts (with lots of pictures!) below:

Rereading these posts makes me want to go back!  Can you be homesick for a theme park?  Because I am… sigh.

In 2009, it was freezing cold and rainy.  I was not a veteran Book Festival attendee back then, and silly me brought a whole backpack of books to be autographed.  Backpacks full of books are heavy.  My shoulders were sore by the end of the day, and most of my books had some sort of water damage from the rain soaking through my backpack.

Nevertheless, this was the year that I met Lois Lowry and Shannon Hale for the first time.  Lois Lowry was such a trooper signing for hours in such cold, damp weather.  Shannon Hale was so incredibly cheerful and adorable and delightful, that after this meeting I went on to read all of her books.  (I’d only read Princess Academy when I met her, but her Books of Bayern series is outstanding!)

Below is a picture of me (with wet hair and my heavy backpack of books) with the legendary Lois Lowry:

National Book Festival 2010
This year was probably my favorite in my National Book Festival experiences so far.  I learned my lesson about lugging around books, and this year I didn’t bring any.  Instead, I brought snacks and water, which was incredibly smart of me because this year it was hot.  And instead of standing around in lines all day, I parked myself in the Children’s/Teen Tent all day and heard so many fabulous authors speak.  (This is the way I recommend doing the National Book Festival: find a good seat and stay there all day.)  Some of my favorites of the day include Suzanne Collins, Phillip Hoose & Claudette Colvin, Rebecca Stead, M.T. Anderson, and Michael Buckley.

Below is a picture of the wonderful Rebecca Stead, Newbery Medal winner for When You Reach Me.

National Book Festival 2011
This year I was really a pro at the Book Festival, and so was my mom, who is a fabulous photographer.  So for the 2011 National Book Festival, I actually did an entire blog post on the day with clear photographs (I didn’t really have many good photos from the previous years).  Authors include: Sarah Dessen, Katherine Paterson & John Rocco, Jack Gantos, Gordon Korman, Cassandra Clare, Brian Selznick, Rita Williams-Garcia, Kazu Kibuishi, and Rachel Renee Russell.  You can read my full post with details on each of the authors:

And here is a picture of Brian Selznick because he was my favorite of the weekend:

National Book Festival 2012
This year I didn’t see quite as many authors speak because my friend, Caroline, was visiting and she really wanted to get autographs, and I stood in line with her.  But I did hear John Green (and I had just finished The Fault in Our Stars), so that was especially amazing because I’d never had the pleasure of hearing John Green speak.  The crowd reacted to him as if he were a ROCK STAR.  Screaming and shrieking.  And it was 10am.  Pretty wild.

I also heard Lois Lowry speak about her new book, Son, which is a sequel to The Giver.  She was wonderful.  You could tell she really enjoyed writing this book, and she seemed so happy to be there and in a much better mood than the rainy day I first saw her on in 2009.

The last speaker I heard this year was Maggie Stiefvater, who I’ve seen before.  She was energetic and entertaining and brilliant as always.

Below is close-up of John Green that my mom took:

Meeting Kristin Cashore
I just met Kristin Cashore this past year when she was touring for Bitterblue, and it was extra special because she was in part responsible for how I managed to find my MFA program in Children’s Literature.  If you want to hear the whole story, you can check out my post on meeting her:

And here is a picture from the event: 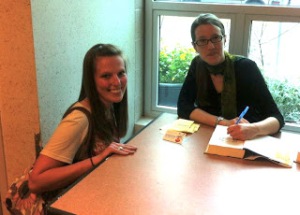 Meeting Maggie Stiefvater (the first time)
Maggie is one of my favorite authors, and I first met her when she was on tour for Scorpio Races in 2011.  Maggie lives in Virginia, so she’s actually in my area quite often, but I kept missing her because I’d always have things going on when she’d have an event.  She is such a great speaker, and you should definitely hear her if you get a chance.  Not only was meeting her great, but I also won a doodled on copy of Scorpio Races at this event.  You can check out the whole post on meeting Maggie here:

And a picture from the event: 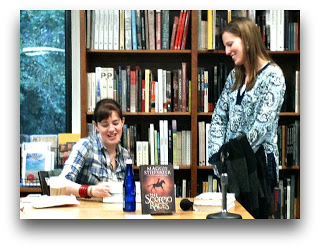 I’m so excited to read about other people’s best bookish memories!  Feel free to share in the comments or leave me a link to your post!