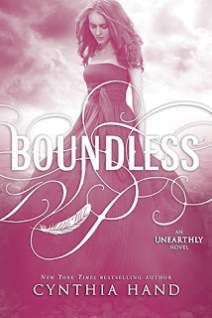 Review of Unearthly
Review of Hallowed

Some minor spoilers for earlier books in the summary, but I did NOT include spoilers in the actual review.

Summary:
This book begins after the death of a loved one and at the start of Clara’s freshman year of college.  Clara, Angela, and Christian are all having new visions.  They can’t figure out what their visions are telling them, so they focus on navigating college life.  Clara tries to move on and forget about Tucker, but even when she’s around Christian… it’s challenging to forget her first love.

Excellent World-Building:
The angel mythology that Hand created for this series is so excellent.  I’m sad this is the last book because I want more of this world she’s created.  In the first book, I was skeptical about Hand’s world-building.  I didn’t understand the visions or what a purpose was.  But that’s because Clara didn’t understand yet.

And now, having finished the series and seen Clara’s growing understanding of her purpose as an angel, I can say that Cynthia Hand does a marvelous job of tackling a topic of having a “purpose” in life.  This was one of my favorite parts of the series: seeing how everything fit together and how the visions played into each character’s choices and destiny.

Bonus: Angels have awesome abilities.  They make logistical sense, and we see them in action in Boundless.  There’s some awesome angel training scenes.

Action Packed:
I was really surprised at how much action and suspense was in this book.  I had a moment where I thought that surely I was at the end of the book, but then I wasn’t!  I’m always a big fan of conflict and tension and this book delivered on that.

Family Relationships:
One of the things I praised highly about Hallowed was Clara’s relationship with her mom.  It’s so refreshing to see positive parental relationships in a YA book.  I’m not saying Clara doesn’t have conflict with her parents, but it’s clear that they love each other and can talk to each other.  This book continues the positive parental bonds by giving us more of Clara’s dad.  And interestingly, Clara’s dad still felt quite dad-like despite being an angelic being.

There’s also a great subplot with Clara’s brother that further shows that family bonds are important.  While their sibling relationship is rocky, it’s also clear that they love each other.  It reminded me of my own relationship with one of my brothers, where we feel this need to compete with each other and be right all the time.

Love Triangle:
Gosh.  What can I say that won’t spoil anything?  Some people are very disappointed with how things ended.  And I can understand where they are coming from.  With a love triangle, readers can’t help but predict and imagine how something might turn out.  I think I could have ultimately been happy with Clara choosing either Christian or Tucker.  I was a big fan of Tucker after Unearthly.  However, both the books and other reader’s arguments have also swayed me to see Christian as a good choice for Clara.

Ultimately, I was happy with the book’s ending.  I cried.  And ultimately was happy.  I have read reviews and discussions where people are disappointed with the results of the book’s love triangle.  But I can’t deny that my emotional reaction upon completing the book was joy and satisfaction.  I understand other’s issues with the ending, and do wonder if I could have been equally happy if Cynthia Hand had written the love triangle differently.

Overall Rating:
I did not expect to enjoy this series as much as I did.  The books read like contemporary novels with great world-building based in angel mythology.  I would have readily continued this series past three books, and will miss the world and characters that Cynthia Hand created.  I give this final book in the series five stars.