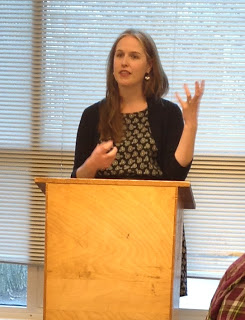 On Tuesday, February 19, I had the pleasure of meeting Marissa Meyer on her last stop of the Scarlet Tour.  I was so incredibly excited because Cinder is one of my favorite books, and I’ve heard that Marissa is a wonderful person.
(She is.  Love her.)

Marissa was a fabulous speaker.  She was charming and funny and energetic, despite a quiet and kind of mellow crowd of mostly adults and only a few teens.  I was a little sad for Marissa because the library and bookstore who hosted the event didn’t do anything for her birthday.  I have experience in event planning, and was definitely thinking of some easy ways we could have spruced up the event and made it more festive.  If only I’d been in charge of planning instead of just a guest!  I did bring Marissa a card, which I like to do for author events anyways.  But in this case it doubled as a birthday card as well!  Wish I’d brought a cupcake, too! 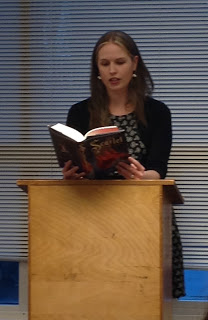 I’d read a smattering of interviews with Marissa and knew some of her story: her Sailor Moon fanfiction background, her NaNo participation, and her quick publishing contract.  However, these tidbits didn’t make up the whole story and it was fun to hear more about where the idea of Cinder came from.  I love how a lot of authors are able to trace back the root of their story to other things they love.  Marissa was able to talk about how her love of science fiction, Sailor Moon, and fairy tales all came together to inspire her Lunar Chronicles.

After she spoke abut the inspiration for Cinder, Marissa read a bit from Scarlet and shared the true gruesome fairy tales of Cinderella and Red Riding Hood.  Then, there was a question and answer period.

I liked Marissa Meyer’s answers to two of the questions during her Q & A.  The first was in response to the question “Are you a mechanic?”  Where she answered she doesn’t, but she did a lot of research.  For my own novel, my main character is a blacksmith, and I’ve never hammered a piece of iron in my life.  But I’ve done a lot of research.  So hearing her answer this way was encouraging that I’m going about my book the right way.

The second was in response to a question asking how she manages to write different voices for the characters. She said how some characters would just come to her and how others would take some time.  I had a similar experience when I was writing my angel short story, where it took awhile before I found my main character’s voice.  She said she had trouble finding Scarlet’s voice, but when it came to her, it worked.  I like hearing writers who have similar processes as my own.  Makes me feel not so crazy and alone in the writing process!

The event ended with book signing, and Marissa’s husband went down the line of people writing our names on Post-Its to help with personalizations.  It was fun to chat with him, and it was clear he was so proud of Marissa.

I was extremely smiley and star struck and flustered when I had my chance to talk to Marissa.  I forgot to grab any swag that they had laying out on the table.  Agh!  But I told Marissa how much I loved that she blended two seemingly unlike genres (sci-fi and fairy tales) and how it was something I was working on in my own novel.  I also told her how much I loved that Cinder was a mechanic.  Yay for women in traditionally male occupations!  She was a great listener, recommended a book for me to read, and wished me luck with my writing. 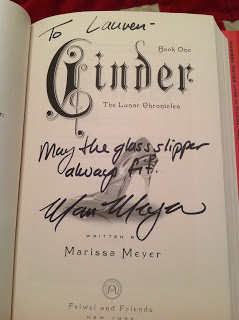 I got both my hardback copy of Cinder and my hardback of Scarlet signed.  Yay!  Hopefully, I’ll have a complete signed collection someday because I’m confident this is going to be one of my favorite book series.

I just finished re-reading Cinder this evening, and I’m going to go start Scarlet… NOW!  Watch for a review in the next week or so!