The National Book Festival is held each year on the Mall in DC.  I go every year and it’s absolute heaven for a bibliophile like myself.  The event is totally free and a great opportunity to meet your favorite authors.  Below is a summary of the authors that I had the great opportunity to see this year:

I absolutely adored Kirby Larson’s Newbery Honor book, Hattie Big Sky.  If you want great historical fiction that is more challenging (but similar to) the American Girl series, you should check out Hattie Big Sky.  I’ve purchased, but not yet had the chance to read the sequel Hattie Ever After, but I’m very excited to, especially after hearing Kirby Larson speak!

I had not read any of Matt de la Peña’s books, but I plan to now!  In a somewhat soft-spoken voice he told several humorous stories from his own life that had the audience laughing.  He explained how his life experiences, being biracial and from a working class family, inspired his fiction.  I purchased his book Mexican Whiteboy and am excited to read it! 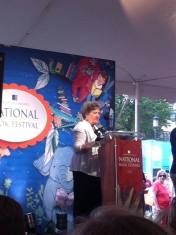 I’m most familiar with Naylor’s Shiloh, about a boy who rescues an abused dog.  However, she spoke mostly about her Alice series, which has been highly controversial and on ALA’s most banned book list.  Naylor shared many of the letters she’d received from readers regarding the impact the Alice series has had on their lives.  I certainly felt by the end of her speech that the Alice series is something I don’t want to miss out on, and I plan to check it out!

As expected, Roth drew the biggest crowd of the day.  The first book in her dystopian trilogy, Divergent, is a soon-to-be major motion picture, and the series is hot on the heels of the Hunger Games trilogy in terms of popularity.  The final book in Roth’s trilogy, Allegiant, is coming out this fall. 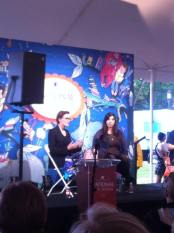 Veronica Roth is on the left. Moderator on the right.

Roth is an extremely young author (early 20s), but I was very impressed with her professionalism.  She spoke about the trend in YA of strong female heroines, but her dissatisfaction that what makes these heroines strong is that they shoot guns and fight.  Shooting guns and fighting are a traditionally masculine version of strong, and Roth hopes that we will see other forms of strength in YA, perhaps feminine and gender neutral forms as well.  There was also some discussion of why Tris is so annoying in Insurgent (book 2), and it gave me a little more tolerance for that book, though I don’t think I’ll ever be a raving fan of it like I was for book 1.

I have not read any of Kirby’s books, but the cover of Icefall was familiar as well as award winning.  I was charmed by Kirby’s love of research and enthusiasm for writing.  I definitely plan to read his latest book, The Lost Kingdom, which looks a little steampunk (I purchased an autographed copy at the book tent).

I’ve had many students recommend the Pendragon series, and after hearing D.J. McHale, I definitely NEED to check these books out.  McHale is a pro-presenter.  He was funny, engaging, and knew how to talk to kids.  I purchased an autographed copy of his latest book, SYLO, that I plan to give away in a raffle to students.  If you ever get the opportunity to see this guy speak, take it.

Huge confession to make: I haven’t read any books by the legendary Tamora Pierce.  I own a few.  Haven’t read them.  I know I absolutely need to!  Pierce’s crowd was brimming with love and enthusiasm for her works.  After playing a little prank on the audience that got laughter and applause, Pierce spent pretty much the entire thirty minutes answering questions.  It was clear to me that she was confident, strong, witty, and a force to be reckoned with in the writing world.  I was thoroughly impressed and also humbled that I am clearly missing out on some great works of fiction.  I see a Tamora Pierce binge reading session in my future…