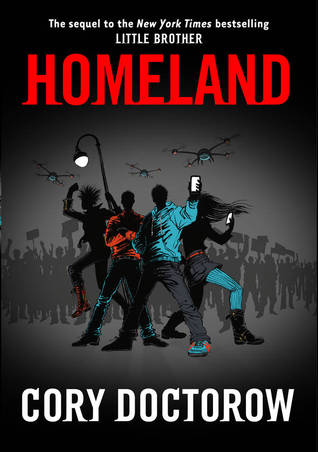 Summary from Goodreads:
In Cory Doctorow’s wildly successful Little Brother, young Marcus Yallow was arbitrarily detained and brutalized by the government in the wake of a terrorist attack on San Francisco―an experience that led him to become a leader of the whole movement of technologically clued-in teenagers, fighting back against the tyrannical security state.

A few years later, California’s economy collapses, but Marcus’s hacktivist past lands him a job as webmaster for a crusading politician who promises reform. Soon his former nemesis Masha emerges from the political underground to gift him with a thumbdrive containing a Wikileaks-style cable-dump of hard evidence of corporate and governmental perfidy. It’s incendiary stuff―and if Masha goes missing, Marcus is supposed to release it to the world. Then Marcus sees Masha being kidnapped by the same government agents who detained and tortured Marcus years earlier.

Marcus can leak the archive Masha gave him―but he can’t admit to being the leaker, because that will cost his employer the election. He’s surrounded by friends who remember what he did a few years ago and regard him as a hacker hero. He can’t even attend a demonstration without being dragged onstage and handed a mike. He’s not at all sure that just dumping the archive onto the Internet, before he’s gone through its millions of words, is the right thing to do.

Meanwhile, people are beginning to shadow him, people who look like they’re used to inflicting pain until they get the answers they want.

Review:
What I enjoy about Doctorow’s books is very much present in this one. I enjoy that the narratives take place in the near-future, and therefore, make you think about the current society and your own role in shaping the future. I also enjoy that Doctorow manages to teach you things in his books–whether it’s tech terminology or why cold-brew is superior. Sometimes these info-dump passages can interrupt the pacing of the narrative, but he does it with humor and within the voice of his protagonist–so I let it slide.

The audiobook is well-done and narrated by Wil Wheaton, who is a great reader and there’s some humor to it since he is an actual character within the narrative.

This book is incredibly relevant to what is going on in the world at present–all Doctorow’s books are–in truth. If you haven’t read any of his work, he’s worth paying attention to.

Overall: Four stars. Incredibly relevant to what we currently face in our country in terms of corruption and elections and protest. Story pacing can be interrupted by info dumps at times, but I also like how I learn something while reading Doctorow’s books.