This is the book that women all over the country need right now.
I need it right now. I plan to re-read it promptly.
Because I so desperately need a laugh, but I also want to feel empowered.

Frankie Landau-Banks at age 15:
A knockout figure.
A sharp tongue.
A chip on her shoulder.
And a gorgeous new senior boyfriend: the supremely goofy, word-obsessed Matthew Livingston.

Frankie Landau-Banks.
No longer the kind of girl to take “no” for an answer.
Especially when “no” means she’s excluded from her boyfriend’s all-male secret society.
Not when her ex-boyfriend shows up in the strangest of places.
Not when she knows she’s smarter than any of them.
When she knows Matthew’s lying to her.
And when there are so many, many pranks to be done.

This is the story of how she got that way.

Who would be interested in doing a read-along of this book? Live discussion? Yes?!
I am thinking the two weeks leading up to Election Day.
Who’s in?? Comment below if you’re interested! 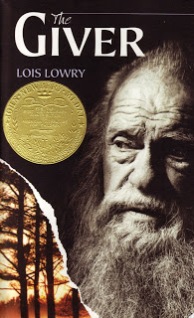 This week’s Oldie but Goodie:
The Giver
by Lois Lowry
Published in 1993

Why I chose it for this week:
I have a theory… There is a glut of dystopian fiction in the YA market right now, and I think it’s because of THIS book.  Many of the authors who are writing dystopian fiction right now were teens themselves when this book came out.  More than once I’ve seen an author list The Giver under favorite books or books that inspire them.  The Giver truly is one of the “founding fathers” of dystopian YA, and if you haven’t read it, you need to.  Right now.

Summary:
In a future utopian society, humans have managed to eliminate pain and strife.  However, they’ve done this by converting to a “sameness” that has eliminated color, choice, and love.  Jonas receives his job assignment, a unique position where he will be given memories from before sameness.  As he sees what the world was like before, he begins to question the life he’s always known.

What I Love:
This book has such depth and makes you think about, question, and appreciate the world we live in.  The concept of giving and receiving memories is such a simple but awesome idea.  I remember wishing as a kid that it were possible to give and receive memories with such vivid detail as was done in the book.

Age Appropriateness:
There are some serious topics alluded to in the book, such as abortion, euthanasia, and suicide.  When I was younger, some of this went over my head.  But going back and reading it at an older age, the heavy issues were clear.  Appropriate for most middle schoolers.  Discussion encouraged.

Bragging Rights
Two years ago, I got Lois Lowry to autograph my copy of The Giver. Will totally rank up there in most awesome moments of my life (despite the fact that it was rainy and cold and disgusting that day).

This week’s Oldie but Goodie:
Ender’s Game
by Orson Scott Card
Published in 1985

Who might like it:
I chose this book for this week’s Oldie but Goodie for fans of Veronica Roth’s Divergent.  First off, Veronica has it listed as one of her fav books, and while I was reading Divergent, I noticed lots of parallel themes and ideas that probably subconsciously came from her love of Ender’s Game.

Here’s a few similarities between Ender’s Game and Divergent:

A lot of similarities, right?

Summary:
Ender is identified as a child prodigy and genius, and taken by the government to a Training/Battle School in space for future military leaders.  At school, Ender is isolated by his young age, genius, and success.  He struggles to find his place as a friend, student, and eventually leader whilst being attacked by other students at the Training/Battle School.

What I Love:
Ender is one of my favorite characters of all time.  The way his brain works is fascinating.  The struggles he faces make you want to wrap him in your arms and give him a hug.  And ultimately, he is one of the most admirable characters I’ve ever encountered for his strength, integrity, and sympathy for others.

The setting of a Training/Battle School in space is one of the coolest settings ever, perhaps only rivaled by Hogwarts.  Despite the violence at the school, I wanted to go away to Battle School so I could play their intense game (a form of zero gravity laser tag) and earn my ranking in the mess hall.

Age Appropriateness:
There is some cursing as well as intense violence.  Though the violence is no worse than Hunger Games in my opinion.  I’ve had middle school boys read this book, with a warning ahead of time.

Some highlights of the cast:

This week’s Oldie but Goodie:
Hoot
by Carl Hiaasen
Published in 2002

Summary:
Roy Eberhardt is the new kid at Trace Middle School, having moved from Montana to Florida.  He becomes involved in a mission to save a habitat of burrowing owls from being destroyed by the construction of a pancake house.  A story of friendship, challenging authority, and making a stand for something you believe in.

What I Love:
Even ten years after it’s publication, Hoot will still captivate young readers with its action, mystery, and humor.  The pranks Mullet Fingers plays will have any kid laughing.  Readers will loathe the bully Dana Matherson and feel sympathy for Beatrice and her family situation.  The message of protecting nature and standing up for something you believe in will resonate with young people and give them hope.  And I sort of have a soft spot for owls… (If you can’t already tell!)

Age Appropriateness:
The word “ass” is used a few times in the book.  There is mention of cigarettes and reference to a gun.  And there are a few fights.  But most 10-11 year olds would be fine reading this book, and it would a be a great book for parents to read with their kid and discuss.