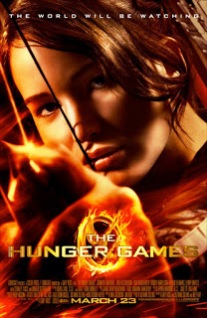 First off, sorry I’ve been MIA on the blog the past few weeks.  We’ve had some gorgeous spring weather that had me outside rather than than inside behind my desk. And I’ve been more of a social butterfly and less of a reclusive hermit.

I don’t normally post movie reviews (though I don’t know why not).  But granted that Hunger Games was first a book… I thought I’d do a post on how I think the movie did in terms of serving the story.

This post probably contains some spoilers if you haven’t read the book, but I don’t think anything I say below will ruin the movie for you if you are one of the few souls who didn’t see it on opening weekend.

What I Liked:
I honestly liked every actor’s portrayal of their character.  Jennifer Lawrence was brilliant as Katniss.  She was fiesty, indignant, and strong.  Josh Hutcherson was a charming and sympathetic Peeta.  Woody Harrelson (Haymitch) was scruffy, fierce, and welcome comedic relief.  Lenny Kravitz was surprisingly understated and thoughtful as Cinna.  Rue was wide-eyed, beautiful, and cunning.  And Gale was pretty hunky in the few moments he was on screen.

My favorite scene by far was during training when Katniss shot the arrow up into the sponsors.  That scene was BRILLIANT.  Exactly how I pictured it in the book.  I loved her spiteful little curtsy and I loved her interactions with Haymitch afterwards.

Another part that I liked was how they showed the arena being manipulated behind the screens.  There would be shots of a room full of technology and the “gamemakers” tracking the tributes and sending new challenges into the arena.  That was probably better than I imagined in the book and helped illustrate how cruel the game was and how the tributes were just pawns to them.

I appreciated that they spent plenty of time leading up to the games just as it was done in the book, with the selection, training, interviews, etc.  They were very good about not leaving out any crucial moments from the book.

What I Disliked:
The shaky camera work was annoying.  I believe it was done to make the violence less “in your face” and to keep the rating at PG-13.  And perhaps it made it feel like you were in the action.  But it was so shaky it made it hard to concentrate and hard to tell what was happening at times.  And I think it was overdone.  I could have understood a shaky camera when Katniss was experiencing hallucinations from the tracker jacker venom, but they used the shaky camera much more than just that moment.

I also felt like the pacing of the movie was much slower than the book.  I just remember the book being such a page turner, but then the movie felt … slow … to me.  I don’t know if this is because I already knew what was going to happen (though I’d read the book so long ago that I’d forgotten several parts) or if being in Katniss’s head in the novel made the danger feel more immediate.  I just don’t know, but the movie definitely had slow pacing for me.

And finally, despite the fact that they were very true to the book, I felt like aspects of the book’s overall tone and satirical aims were missing.  I didn’t feel like there was enough hatred for the Capital and if it was clear how much Katniss hated them.  The unfairness of the Games wasn’t prominent enough.  How the poor stood no chance.  How young children were up against trained 18 year old killing machines.  How the Districts were forced to watch their children die.  How the fact that watching children kill each other on TV is a commentary on the violence in our own society that we glorify.  I just felt like the book did a better job of raising these issues and creating a tone that questioned them.  Katniss was such a critic of the world she lived in, and her narration helped us see the inequities and the  shallowness of her world (and in turn our own).

Overall: The movie was well done.  They were true to the book.  Jennifer Lawrence did a brilliant job. This was one of the better treatments of book to movie that I’ve seen.