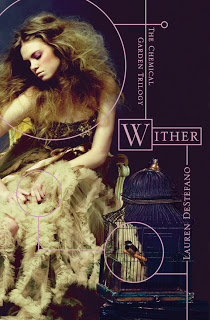 Summary: In the future, mankind suffers from a terrible virus that kills men at age 25 and women at age 20.  Scientists are desperately seeking a cure whilst the world has been driven to poverty, kidnapping, prostitution, and lawlessness.  A girl named Rhine is kidnapped and forced into a polygamous marriage.  Rhine is showered with gifts, fine clothing, and the best food in the mansion of a wealthy mad scientist, but looks for a way to escape and return to the free world and her twin brother.

What I Liked:
Originality: This premise hasn’t been done before.  The idea of humans messing with genetics to the point where they do something drastically wrong to the genetic code (and can’t undo it) is a fascinating starting point for a science fiction story.

Gritty Beauty: The contrast between the splendor and richness of Rhine’s surroundings with the horror of the disease and state of the world was mesmerizing.  It reminded me of the gritty urban fantasy worlds of Holly Black and Cassandra Clare.  The contrast between beauty and darkness draws attention to the extremes of this post-apocalyptic world, though I’m curious to see if the author does more than just draw attention to the differences between social classes.

Characterization: I grew to love several of the characters and thought they were well-developed.  Jenna, Cecily, Dierdre, and even Linden were full and complex personalities.

What I Didn’t Like:
World-Building: If this were simply a story about a girl who is kidnapped and taken to a mansion, then I might have been satisfied with the world-building.  The mansion is a fully developed location.  But the rest of the world?  I could not buy into how the world got to be the way it is.  People dying young does not in my mind equal kidnapping, killing, and forcing girls into prostitution.  The world was described as so unsafe for girls that they weren’t even out of danger in their own locked and booby-trapped homes.  I really don’t understand how the world got to be this way.  This world is so violent against women that it seems implausible.  Especially considering the trigger is a genetic virus… Genetic Virus = Enslaving Women???

Rhine’s Conflict Resolution: I completely understand Rhine wanting her freedom back.  That is completely understandable after being kidnapped.  But I did not understand her logic of wanting to go back to the life she led before.  Cowering in the basement with dead rats in a booby-trapped home?  Not feeling safe walking anywhere because someone might pull you into a dark truck in an alley?  Yes, you have memories of family and your old life.  Yes, you have your twin brother who does what he can to protect you.  But this is no way to live.  And if she goes back, she’s just going back to living in fear and possibly being kidnapped again.

So when Rhine is at the mansion, her only plan is to escape, with no money or resources, and make her way from Florida back to Manhattan.  This plan is idiotic.  Rhine is presented as intelligent.  Her parents insisted on her being educated and she has more knowledge of the world than most other girls.  But this plan shows no indication of her intelligence.  Here are some other plans that I would have liked to see Rhine try:

There were just so many different directions that the author could have went in that would have shown more strength and intelligence on Rhine’s part.  And Linden never presented himself as an unreasonable character.  He really did love Rhine and we are led to believe that he did not know the violence that brought her here or the life he had stolen from her.  I would have liked to see Rhine at least try to reason with him.

My Rating: Only 3 stars, and I think that’s pretty generous.  The reason I’m being generous is because I’m hoping DeStefano has a plan up her sleeve for the rest of the trilogy.  If I weren’t doing this event, I’m not quite sure I’d pick up the sequel, Fever, on my own initiative.  But I already started Fever, and let’s just say I think Rhine’s total lack of planning is getting her into some pretty deep trouble.

This book review was part of the Catch Wither Fever Event.
Stay tuned for my review of the second book in the trilogy, Fever.