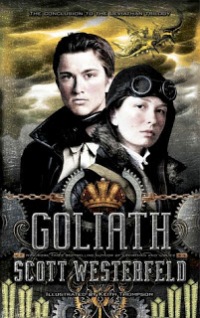 *Some mild spoilers in the summary, but tried to keep spoilers out of the review*

Summary:
Alek returns to the Leviathan after Deryn’s persuasion, and they leave Istanbul and the revolution behind them.  While Alek feels he’s made a difference in the war, he still desperately wants peace.  Their travels lead them across the world, first to Russia, then Japan, then finally to the United States with a pit-stop in Mexico.  Deryn continues to thrive as an airman, but struggles with keeping her biggest secret from Alek.

This final book in the series definitely earns the Hughes Reviews Seal of Approval. Scott Westerfeld completes this series with such satisfaction.  There is a line at the end of the Afterword that just filled me up so completely like few books ever have.  I’m in love with the idea of alternate history novels now.  Paired with the brilliant illustrations by Keith Thompson, you will be mesmerized by this series. Definitely check these books out!

World-Building/Setting:
I was not expecting so much travel in this book!  That was such a pleasant surprise!  The Russian Bears were eerie and terrifying.  Japan’s kappas revealed the gruesome nature of war, but the descriptions of food in Tokyo made me hungry!  The United States didn’t have the same wonder and flavor of some of the other places, but the climax and reappearance of old characters more than made up for it.

Characters:
This book had some of my favorite moments between Deryn and Alek.  Westerfeld does such a wonderful job of showing their friendship and growing feelings for each other through their actions.  Both Deryn and Alek are conflicted about their relationship, but so clearly care for each other and would do anything to protect each other.  They are probably my favorite book friendship/relationship ever.

Plot:
While not quite as fast-paced as Behemoth with action and battles, the travel kept the pacing quick and Alek and Deryn’s interactions kept me turning pages.  The ending is quite literally shocking, and I flew through the last 50 pages.  And you must read the afterword in each book because it gives such insight into the plot and how/why events unfolded as they did.  Westerfeld explains what parts of history he was inspired by and what events were altered for the book.  It brings a whole new perspective to the plot.

BONUS!  Gorgeous Illustrations:
It was hard to pick images that weren’t spoilers for Goliath because so many are…  These aren’t!  Again, illustrations are by Keith Thompson and are throughout the book, making these a joy to read!

Overall Rating:
Five big, brilliant stars.  Goliath is a wonderful and perfect end to the series.  I can’t recommend this series highly enough for fans of fantasy, science-fiction, or historical fiction.  It is a must-read!