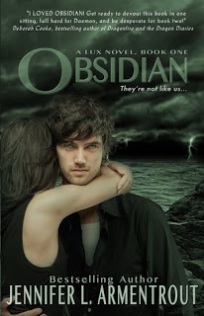 Summary:
Katy moves to a small, obscure town in the middle of West Virginia after her father dies from cancer and her mother needs a change of scenery.  Her next door neighbors happen to be incredibly attractive twin teenagers: the bubbly, friendly Dee and her arrogant, rude brother Daemon.  Katy and Dee become friends, but Katy isn’t sure what to make of Daemon.  Most of the time she wants to slap him, but then she learns he has a secret… he’s an alien.  And Daemon’s alien abilities have put Katy and his family in danger.

Characters:
This may sound a little too similar to Twilight in it’s premise, but the characters make this paranormal romance much more enjoyable and interesting.  If you want a paranormal romance with a teen girl heroine who actually has interests/hobbies and doesn’t let herself be pushed around just because a guy is hot, then Armentrout wrote this book for you.

The main character, Katy, is an enthusiastic book blogger.  I found it refreshing to have a main character who has a passion and interest outside of the romance.  And when hot next door neighbor, Daemon Black is a total jerk, she dishes it right back at him.  Katy is a spitfire and doesn’t hold back the insults just because her target has washboard abs.  Katy and Daemon’s fiesty relationship makes the soft, tender moments even stronger.

I’ve always been a fan of relationships that start off fiesty between characters, and it takes awhile before the characters admit that they like each other.  Examples: Elizabeth Bennet/Mr. Darcy (Pride and Prejudice) or Mary and Matthew (Downton Abbey) or Ron/Hermione (Harry Potter).  Katy and Daemon have this kind of relationship. Obsidian is very much rooted in how they can’t stand each other but have this underlying chemistry.

Armentrout has a definite strength as a writer in creating chemistry between characters, and this sets her books apart from many of the other paranormal romances out there.  If you haven’t checked out this series… there is a reason so many readers are swooning over Daemon Black.  He’s far too swoonworthy for his own good… or Katy’s.

Snappy Dialogue:
Another strength of this book is the dialogue.  It’s snappy.  Quick.  Real.  And totally fun.  I laughed out loud a few times.  And the characters sounded like totally authentic teenagers.  I wish I’d taken better notes as I was reading of some of the dialogue that made me laugh out loud (I’m much better at highlighting/note-taking when I’m reading eBooks instead of physical books).  Here’s a few lines that I managed to find as I flipped around:

Example of Katy and Daemon spitting fire at each other:

A friendly chat over boys:

And Daemon calls Katy “Kitten” and I sort of LOVE it:

Action and Pacing:
Whew!  There’s action throughout the book.  Not just at the end like a lot of paranormal romances.  Life in danger, things exploding, powerful evil aliens, and more.  The book is chunky at over 300 pages, but I easily finished it in just 2-3 days because it was hard to put down.

Cool Aliens:
I know there’s probably a lot of people who are skeptical about the whole alien bit.  Especially the idea of “hot aliens.”  I don’t want to spoil anything, but I really liked the explanation of the aliens and thought the world-building was really solid.  The abilities of the aliens make sense, and their backstory makes them sympathetic.  It’s a fun twist on the paranormal romance category (in fact I wasn’t even sure if I should place this series in that category because I wasn’t sure if aliens fell into paranormal, but whatever.)

Criticism:
These books are intended as a guilty pleasure sort of read.  Bits of the story are quite predictable and follow the format of paranormal romance. Girl meets extra hot guy, notices something is off about him, discovers he’s not human, has special powers, he saves her, and they fall in love. That’s the formula, right?  If you’re going in expecting this to be different from that formula, you’ll be disappointed.

Word of Caution:
I’d say this is a book for the older YA set.  I wouldn’t recommend this to my middle schoolers.  Lots of profanity and sexiness.  A totally fun read for more mature readers though.

Overall Rating:
The characters are strong and interesting, the romantic chemistry is excellent, the dialogue is super fun, and the aliens are a fresh twist.  If you enjoy paranormal romances, this one is a standout and worth adding to your collection.  I gave it four stars.